Watching: Who Are You, Really? The Puzzle of Personality, by Brian Little. A TEDTalk from a psychologist on what personality is—and how to transcend it when you need to.

Following: Myths and Legends, a podcast about folklore from around the world. Dragons, wizards, knights, and more—fascinating stuff. Reading: “The Last Unknown Man,” a longform piece from the New Republic about a man who appears one day outside a Burger King in Georgia with no idea who he is…and it turns out that no one else knows his identity, either.

Watching: Superstore, a sitcom that follows a group of truly quirky employees as they navigate their careers at a Wal-Mart-esque store called Cloud 9. Reading: The Little Prince—a classic children’s book that I’ve never read. One of my best friends stayed with me over the holidays, and it’s his favorite book, so he gave it to me as a thank you for hospitality. I’m only halfway through it, but I like it so far. It reminds you of the importance of imagination and creativity.

Watching: Homeland. I re-watched the whole series in a little more than a month (yes, I need a life). It’s such a great show.

Listening to: Anything happy and upbeat. It’s a grim time of the year, so I need a little energy boost. And music’s the best way to do that.

Following: The hearings for who will be on the President’s cabinet. The people he picks will directly impact health and education, so I want a heads-up of what’s to come.

Reading: 100 Little Things About Pregnancy, Birth, And Being A First-Time Mom by Adriel Booker. She talks about her journey in becoming a first-time mom, from breastfeeding to post-partum recovery.

Watching: Moonlight—a moving story that follows a bullied young boy as he struggles with his identity. The story follows him from childhood to adulthood as he faces adversity and overcomes through the relationships that he develops along the way. It’s a very moving and emotional film.

Listening to: I have been listening to a lot of gospel music lately, artists such as Tasha Cobbs and Travis Greene.

Following: @frobabies on instagram. Frobabies is a clothing line, but they also post daily pictures of cute little babies and toddlers. Cutie overload. Reading: I just started Hillbilly Elegy by J.D. Vance. The memoirist is only 31 years old, but he grew up in Appalachia, and wrote this book to offer insight into what’s happening in the U.S. Politicians on both sides reference this book for explaining “what it all means”—how Trump won and why a sizable section of white America feels left behind.

Watching: The Parent Trap—the original, 1961 version. I watched this movie all the time as a kid, and now it’s on Netflix. Eight-year-old me is so psyched right now.

Listening to: A Spotify playlist I made of songs that calm me down. It’s been in heavy rotation lately.

Following: All of the rogue government Twitter accounts that have popped up when the President tried to silence the main accounts—from @RogueNASA and @AltNPS to @RoguePOTUSstaff and @Alt_CDC. This is a shining example of why social media fascinates me. 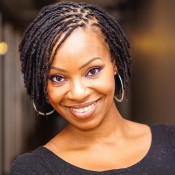 Kadesha Thomas Smith is a healthcare writer who has a slight obsession with web content strategy, design and search engines. She has a BS in journalism from Florida A&M University and an MPH from Tufts University School of Medicine. As Founder and CEO of CareContent, Inc., she helps healthcare organizations attract patients and build online communities through content marketing. Learn more at CareContent.com
View All Posts By Kadesha Thomas Smith
Work-Life Balance